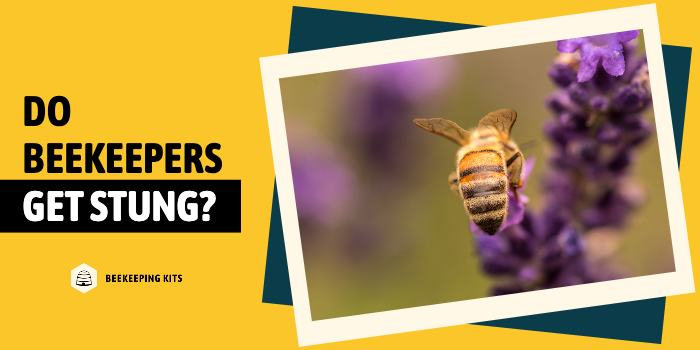 Do beekeepers get stung? There are few questions more commonly asked of beekeepers!

It can be hard to imagine that bees are able to get through the tough suits that beekeepers wear, but many people still find themselves curious about this aspect of this work.

Of course, beekeepers do get stung.

No matter how airtight your suit is, it’s impossible to avoid the pain that these small creatures can cause.

This doesn’t mean that beekeepers are constantly being ravaged by their tiny livestock, though, and it might surprise you to learn just how pain-free this sort of hobby can be.

Let’s take a deeper look at beekeeping and getting stung to give you an idea of what to expect if you want to start something like this for yourself.

Why Do Bees Sting?

Most bee species aren’t naturally aggressive creatures. You could happily walk past a hive without any protection without getting a single sting in most cases, with most bees preferring to save their sting for real threats.

Unlike a spider’s bite, a bee’s sting isn’t a tool to help them hunt or get food.

Bees sting as a form of defence, and this weapon has been designed by evolution to be extremely effective against insects and other small predators.

What might leave you with a lump and some pain will quickly kill an insect.

This is how bees protect their hive, and it makes a lot of sense for them to be able to do this when you consider how much work goes into producing a healthy hive.

How Often Do Beekeepers Get Stung?

Most people would probably rather skip beekeeping altogether if this sort of injury occurs on a daily basis. Thankfully, though, it’s much less than that.

Most beekeepers will only get stung a handful of times throughout the year, with 10 stings in a single year being considered a lot.

Alongside this, any beekeeper will tell you that the first few stings are always the most painful. After this point, your body will get used to the toxins contained within the sting, and you will be able to brush them off far more easily.

So, if you were worried about getting started as a beekeeper, it’s probably worth setting your concerns aside.

Your bees won’t actively attack you unless you make a big mistake, and most of the bee species kept by modern beekeepers are picked because of their easy temperament.

How Do Beekeepers Protect Themselves From Stings?

While bee stings aren’t that common for beekeepers, most will work hard to protect themselves and avoid this sort of injury.

You’ve probably seen the suits that beekeepers tend to wear, and this is a big part of their protection.

Let’s take a look at some tools a beekeeper can use to prevent and avoid bee stings.

A full-body suit, set of thick leather gloves, and a fencing veil are the typical outfits worn by beekeepers.

While this type of suit doesn’t form a perfect seal around you, it will make it extremely difficult for bees to gain access to your soft skin. This type of suit comes with other benefits, though.

Most beekeepers will wear a white suit, as this offers more protection from their bees.

Most of the predators that bees are hardwired to react to are dark, and this means that they are likely to have far less of a reaction to someone wearing white vs. a colour like black. Wearing a white suit is a great way to protect yourself from stings.

Bees communicate with one another using chemicals called pheromones.

These chemicals are released into the air, allowing bees to become defensive when an individual senses a threat.

Smoke can disrupt this process, stopping your bees from communicating with one another and making it easier to keep them calm.

Honey bees are the only type of bee that will die after stinging you (or anything else, for that matter!).

The honey bee’s stinger is both barbed (so, it cannot easily be pulled out after stinging) and attached to their digestive tract. That means the force required to even attempt to pull the stinger out results in the bee’s insides being ripped out of their body (not pleasant, right?).

While it’s thought to be highly unlikely the bees are aware that using their stinger will inevitably lead to their death, they are still quite placid creatures and will only sting when under threat.

For example, a bee will panic when it feels too much pressure on its body, causing it to become aggressive.

This means that handling your bees needs to be done with a lot of care, especially when you consider that a panicking bee can cause a chain reaction throughout the whole hive.

It’s particularly important to keep this in mind when you are moving the panels inside your hive.

While bees can’t gauge your emotions, your mood will always impact the way that you act with your bees.

Being overly stressed is likely to lead to mistakes, and this makes it worth taking the time to calm yourself before working with your bees.

Most beekeepers just about forget about the threat their bees pose to them, making it nice and easy to ignore the issue.

While rare, it’s likely that you will get stung at some point during your time as a beekeeper.

Treating your sting properly can reduce the healing time and make it far less painful. It’s worth having some supplies at hand to make sure that you can treat your bee stings as soon as they happen.

There are a few steps to take in this process.

Being stung by a bee is an inherently stressful event, but this doesn’t mean that you can allow yourself to overreact.

You need to remain as calm as possible, allowing yourself to handle the situation without getting more stings in the process.

Before you can work on the sting, you need to find somewhere safe and away from your bees.

It’s likely that other bees will attempt to sting you if you stick around, and this means that you should keep your suit on until you are safe.

Unlike wasps, bees will usually leave their sting behind once they have used it. You will need to remove this before you can do much else.

Tweezers are perfect for this job, but you need to be careful that none of the sting is left behind.

While it may not look like much, bee stings can be prone to infection, and this makes it worth washing your sting with soap and warm water before any other treatments are used.

Ice packs can be a great tool when you want to reduce the swelling of a bee sting. This will also help to numb your tissue, making the sting feel less painful.

Most people are able to ignore the pain of a bee sting, but you can use over-the-counter medication to combat this pain if you want to.

Products like hydrocortisone cream and calamine lotion can ease redness, itching, and swelling, making them ideal for combatting some of the symptoms of a bee sting.

Most people will have a normal reaction to bee stings, and it won’t be too unpleasant to go through this process.

Allergies can easily change this, though. If you are worried that you are having an allergic reaction to a bee sting, it will be well worth speaking to a doctor or going to a hospital to make sure that you can get proper treatment.

Strong bee allergies are quite rare, but they can result in death in some cases.

Like many of the different types of injuries that humans can sustain, the anticipation that comes with a bee sting is often worse than the real thing.

That said, a bee sting will hurt, and the reaction that you can expect differs from person to person.

Most people will experience an instant burning pain at the site of the sting. To some, this will feel like being pinched extremely hard.

This pain can last for a couple of hours, slowly rising and falling in intensity until it clears.

Swelling and redness will also occur, and this will be accompanied by a small amount of pain that can last for a couple of days.

It’s hard to describe the feeling you will experience, and it will be worth seeking professional help if you are very worried about your sting.

As you can see, beekeepers certainly do get stung, but they also work very hard to avoid stings.

This work will usually pay off, and you can happily look after your bees knowing that the small amount of pain you receive in the process will be well worth it for the delicious honey you get at the end. 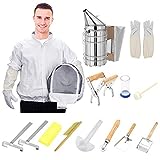 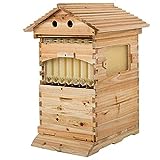 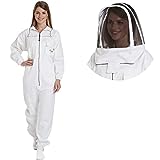